Most Expensive Places To Live In The UK 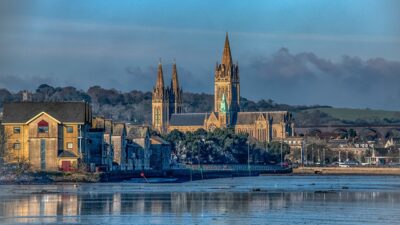 Whether you’re looking to move to a new, expensive location, or you’re dreaming of another life, where money wasn’t an object, there are plenty of choices of luxurious cities and towns across the UK.

It’s safe to say that the South of England dominates when looking at the most expensive areas in the UK due to the average wage also being higher, but both the north and south have a huge choice of homes and locations to suit all budgets. However, if it’s value for money you desire, you may be better off choosing a northern city or town.

A surge in city house prices in the UK over the past year now sees the average property costing 8.1 times the average earnings and the property market is more competitive than ever as many of us want to relocate out of our homes. So where are the most expensive places to live in the UK?

Most Expensive Cities In The UK

With 69 cities to choose from, the UK certainly offers a city for everyone. Out of the 51 cities that are situated in England, it boasts some of the most expensive cities in the UK.  English cities still tend to be marginally more affordable than rural areas and towns as wages in urban areas tend to be higher than in rural areas.

Based on the average cost of a home and the average earnings in the area, the most expensive cities in the UK are:

The small but vibrant city of Winchester in Hampshire, England sits a the top of the most expensive cities in the UK. Winchester is the perfect location if you enjoy a city that boasts culture, incredible architecture, superb shopping, elegant dining, country walking and cycling. Winchester does offer everything including a higher than the average national salary.

The idyllic city of Oxford is the second most expensive place to live in England. Home to one of the top universities in the world, Oxford is a historical city with lots to do, see and enjoy. Close to London, Oxford is great for commuting but also has a high number of job prospects and the people of Oxford generally earn higher than the national average.

Cornwall’s sole city, Truro is the centre of all things leisure, retail and culture in the southern county. Enjoy the beautiful architecture and beautiful countryside, and the seaside just on your doorstep. All this does come with a cost though, with Truro making the top 3 most expensive cities to live in the UK.

Famous around the world for its Georgian townhouses and Roman-built baths, Bath is one of the most desirable places to live in the UK. Drawing visitors from across the UK and globally, Bath is a bustling city with exquisite homes.

Chichester is another beautiful city that is renowned for its Roman-built architecture and old streets. Located in West Sussex, it is an upcoming city that balances trendy and modern with quaint and historical.

Famed for its excellent education establishments, Cambridge is one of the most historical cities in the UK. Overflowing with culture and things to do, Cambridge attracts visitors far and wide with its extraordinary university buildings dominating the centre, and the River Cam running through. Its expensive accommodation and cost of living are what puts it in the top 10 most expensive places to live in the UK.

Unlike other coastal towns and cities in the North of England, Brighton and Hove come with a price, but it isn’t unjustified. The iconic pebbled beaches, endless independent eateries and amazing shopping are what people travel far and wide to find in Brighton. To support it being Londoner’s choice of a city escape at the weekend, Brighton has excellent travel links and a highly competitive house market.

Needing little explanation is the capital of England, London. The biggest city in the UK is infamous for being the most expensive place to live in the UK. Overpriced accommodation and expensive food and drinks will generally set you back more in London than any major city in the north. However, the cost of living depends on the area of London and the commuting distance.

Just up the road from London is St Albans, Hertfordshire. St Alban’s is a popular commuter destination but also showcases its medieval history and old architecture. With lots to do, and high demand for accommodation, St Albans is a sophisticated city with an expensive cost.

The 10th most expensive place to live in the UK is Chelmsford. Chelmsford is in the heart of Essex, known for its luxury lifestyle and acres of green spaces and parkland. Many choose Chelmsford for commuting to London, as it is just a 40-minute train ride away.

It’s easy to see why these cities made the top 10 most expensive places, as they are all incredibly desirable with lots to do, see and enjoy. A common theme amongst many of the cities is their proximity to London or ability to commute. But what about living in London?

As it creeps down the most expensive places to live list, are people choosing to swap the busy city life with a quieter and greener way of living? There will always be a high demand for location in the big city, but if you choose to live there, where should you live?

Most Expensive Places To live in London

Depending on your budget, you’ll either be looking for the most expensive places to live in London or be looking to avoid these places.

The top three places are the premium districts of London where you can find famous landmarks, experience fine dining and are more than likely to spot a celebrity face or two.

The average property price in the City Of Westminster is just above £3million, putting it in the most expensive neighbourhood in London. Home to the Queen and the prime minister, Westminster hosts some of the most iconic landmarks including Buckingham Palace, Downing Street and the Houses of Parliament, as well as some of the most famous streets Regent Street and Oxford street.

Famous for its high-end restaurants and shops, grand Victorian homes and leafy garden squares, Knightsbridge is designed to attract the rich and famous. Bordering Hyde Park, everything about Knightsbridge screams wealth including luxury department store Harrods and banks for the wealthy. A property in Knightsbridge is likely to set you back £2.8million on average.

The ever-popular Royal Borough of Kensington and Chelsea is up there with the top 3 most expensive areas to live in London. Known for its wealthy and well-known residence, this neighbourhood is infamous for gorgeous houses, that on average cost just over £2million to purchase. With its royal status, Kensington and Chelsea are incredibly sought after and it’s easy to see why.

Most Expensive House In the UK

The current most expensive house in the UK is a £250million Mayfair, London super-mansion. Built from two mansions, this 43,000sq ft is the size of 55 average London flats, features 15 bedrooms across eight floors, a ballroom, Thai-themed dining room, car stacker and indoor pool.

Last year, the most expensive detached house on the market was a £40million super-mansion in London. The glossy-white Hollywood-style house is situated in Hampstead Heath with 10 bedrooms, seven bathrooms and is an 18,300sqft property set in two acres of land.

The most expensive house in the UK varies from year to year with each property boasting impressive features, and years worth of construction. Many of the biggest houses in the UK are privately owned country houses or stately homes that generally descend from royalty.

Reliable removals across the UK

With the experience of moving large properties, in and around the South of England, Bluesky Relocation offers a trustworthy and reliable removal experience. We move houses across the UK and to some of the most expensive areas in the UK including Winchester and Oxford.